Some time ago, I was fortunate enough to see two big exhibitions of the American artist Cy Twombly. The first was a retrospective at the Tate Modern, where I saw his work for the first time. The second, at the Dulwich Picture Gallery, was an astonishing and original juxtaposition of two apparently completely different artists – Twombly and Nicolas Poussin. For a long while I was inspired and pondered on the nature of abstraction and the creative phenomenon of this mysterious but without doubt great abstract artist, and in time these thoughts found their way into this project.

Searching for images in the world around us has interested me for a long time, but in this instance I wanted to photograph objects of nature that have spontaneously, or elementally, formed themselves in natural abstraction. Photography was for me a tool to create work close to graphic art and even painting. Looking through the slides I had taken, I noticed that practically all the shots in this series were reminiscent of Cy Twombly’s abstract compositions! This revelation inspired me in my search and selection of Twombly’s works that are in mood and composition close to my photographs.

A dreamachine is “viewed” with the eyes closed: the pulsating light stimulates the optical nerve and alters the brain’s electrical oscillations. The user experiences increasingly bright, complex patterns of color behind their closed eyelids. The patterns become shapes and symbols, swirling around, until the user feels surrounded by colors. It is claimed that using a dreamachine allows one to enter a hypnagogic state.[4] This experience may sometimes be quite intense, but to escape from it, one needs only to open one’s eyes

Proposal for Gorky Park, , and under the patronage of the Centre for Contemporary Art “Garage”

Fred Sandback, a photo by Max Ksuta on Flickr.

Frederick Lane Sandback was born in Bronxville, New York where, as a young man, he made banjos and dulcimers. He majored in philosophy at Yale University (BA, 1966) before studying sculpture at Yale School of Art (MFA, 1969) where he studied with, among others, visiting instructors Donald Judd and Robert Morris.

To fail to find a way in a city is an ordinary thing. Another matter is to lose
your way there, like you do in a forest. This requires practice.

Walter Benjamin “Childhood in Berlin at the Turn of the Century”

Losing your way in your own city is next to impossible: you need to possess Benjamin’s skills of a flaneur to stray from your habitual routes.  anging around without any certain purpose is a task hardly feasible for the modern city dweller. A lonely walk is, rather, an attribute of literature, a true companion of romantics and melancholics, not of people always in a hurry on some extremely important business. At the very moment when an imaginary city map with a fantastic topography starts to form in Benjamin’s mind, Maxim Ksuta shifts his gaze upwards, and his routes lie in a different plane where the sky of the city is lined with electric wires turning it into a graphic surface. Fussy reality seems to draw back, the space is cleaned to a near sterility — before us there are “sheets” which resemble either works by the American minimalists — from Agnes Martin to Fred Sandbeck, or the static compositions of the Russian constructivists.

The comparison with minimalism in this case is far from being casual: Ksuta’s works come in a series. The same theme can be endlessly and  aturally varied — the artist consciously uses his means sparingly, intensifying at the same time the effect of recognizing more than just specific electric cables in abstract lines and spirals. The serial nature of the works contain a different energy and another type of movement, the change of focus is dynamic, the viewer is led not by the logic of reality, but by the dimensional arrangement of each composition. In a certain sense, Ksuta does not build a photographic frame working with proportions, dimensions and density of real objects, but solves purely artistic tasks, as if he is free
to cover the sky of the city with lines of the required thickness, to build or to break the symmetry. There were few who allowed themselves the liberty to reshape visible reality: among them are Alexander Rodchenko and Laszlo Moholy-Nagy, who turned photography into a valuable artistic means which provided the artist with no fewer opportunities for imagination than traditional painting and drawing.

Ksuta skilfully maintains the balance between the specific and the entirely abstract. In his series you can even feel the almost imperceptible rhythm when in a row of ideal geometrical constructions are inserted images of a clearly identifiable landscape, of birds caught in the wires, of posts and other marks of the Moscow landscape. he doesn’t remove from the city its symbolic and visual essence which might express, indicate, determine. There is nothing exceptional in his attitude, no desire to make a grand gesture. On the contrary: his series develops steadily
and tactfully in relation to the viewer and, notably, not at all in the space, which is everywhere the same: the grey sky, the wires, but within time. All the photographs are marked with the date when they were taken, and one doesn’t even feel like seeking logic here: it’s hardly relevant, if there is any at all. It’s just that once you stray from what is familiar and come to see the previously unknown systems, structures and forms of life (as in the video ‘16072010’, which features in the exhibition), which are visible only to the perceptive eye of a flaneur. And the moths flying unbelievably fast around the lantern in Ksuta’s video turn into galaxies, clusters of strange, glowing objects. We lose our usual perception of gravity, scale and reality itself, falling readily for the power of the image which is capable of revealing a different, phantasmagoric space. 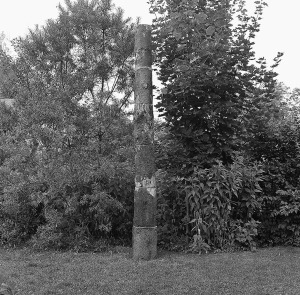 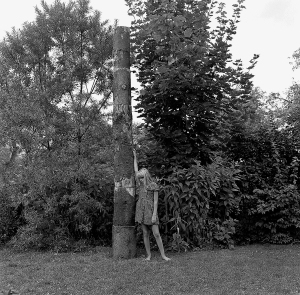 Repeatedly drawn attention to some places that are timeless. This is not a historical artifact, this is the stage of life atrebutirovat which is not possible. What makes them quite unique.

New sculpture in the woods – “Totems.” The program “Master of the forest.”
Technique – car tires.