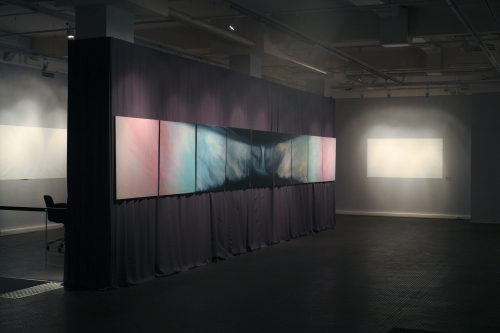 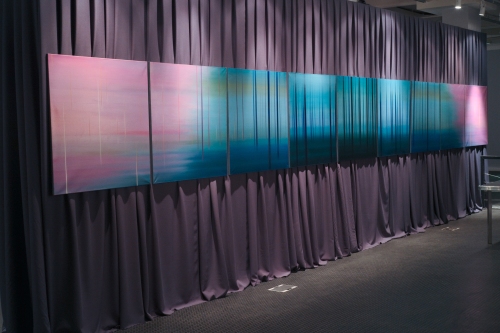 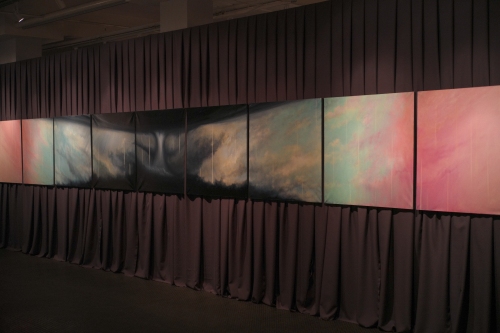 While working on The Sequences of Conditions, I was inspired by two works of fundamental research: a book by Martin Gardner entitled Penrose Tiles to Trapdoor Ciphers and Barnett Newman’s manifesto The Plasmic Image.

ELEMENTS
I have always been fascinated by the problems involved in creating a universal artistic element that could be developed endlessly, interacting with different spaces. By way of example, fractal is such an element in mathematics. In my project the fractal medium is a square that has no proportions. Two images constructed from such elements bear an extremely approximate resemblance to the familiar world that we know (“forest”space and “atmosphere” space).

Atmosphere is a combination of chemical elements. By analogy, the atmosphere of the picture is created thanks to the interaction of minerals bonded by resins, oils and varnishes. In my project I set myself the figurative objective of combining two spaces in one work so smoothly that spectators would not be able to perceive the transition. As is the case, for example, in ambient music popularly termed atmospheric.

The sequence of the condition of the work arises thanks to the colour dynamics in its fragments. This approach is closer to a Chinese scroll than a North European still life, which compels us to come closer and closer to the work. And this is how it is disclosed, demonstrating yet another quality — the microcosm of the details. Works on scrolls exceeding 10 metres in length motivate us to look for the great in large-scale works,
which cannot be appropriately viewed in a single glance. In my installation each separate fragment represents a frame of the conditions. The Sequences of Conditions may be developed in different physical directions, unleashing the hidden potential of degrees of freedom of the work, while simultaneously immersed in its own lack of freedom. This growth process in the infinite work can be stopped once I receive answers to most of the questions that I have raised regarding painting, methodology and motivation.

The impact of the work is not attributable to the form, but instead to the elusive magnetism surrounding the space of the work. Such magnetism in Newman’s works was expressed in a series of plasmic paintings. I was enthralled by this idea. I worked on the composition of space, using the technique of consecutive simplification, abstracting as much as possible away from figurative art.

CHORUS
The audio video installation consists of 12 LCD screens, where one character singsthe vowel sounds, of which there are naturally six in Russian. Each scene and sound isplayed on a separate screen. The screens are specifically not synchronised with each other at the launch of the video, while the sound is intentionally expanded with a reverberator,
thereby acquiring a volumetric and slightly otherworldly sound. In the 1950s Igor Stravinsky started using serial compositional techniques, which involves a specific concept for writing music, namely: a technique of musical composition whereby a series (row) of non-recurrent sounds serve as the pitch. It was introduced into musical practice in the works of Arnold Schoenberg and Аnton Webern. Threni: id est Lamentationes Jeremiae Prophetae from 1958 was the first completely serial composition, where Stravinsky rejected tonality as such. Working on the “chorus”, I adhered to the serial technique and intentionally selected the vowel sounds of the composer’s native language, which can be sung and combined
in a polyphonic structure.